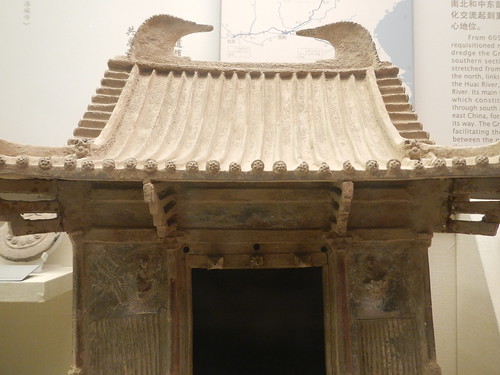 A tile component used at both ends of the roof ridge (zhengji 正脊) of traditional Chinese palatial halls（diantang lei jianzhu 殿堂類建築). Their specific shape can include owl or hawk tails (chiwei 鴟尾), dragon tails (longwei 龍尾), and beast heads (shoutou 獸頭). Different names for this feature were also used over time, including sea-beast tails (chiwei 蚩尾), shrine tails (ciwei 祠尾), owl or hawk beaks (chiwen 鴟吻), central lips or jaws（zhengwen 正吻) and great lips or jaws (da wen 大吻). Before the mid-Tang dynasty chiwei were usually a simple tail arching inwards and decorated with fin or feather patterns on the outer edge. In the mid-Tang we see the added pattern of a beast head with an open mouth, and the tail gradually transitioning into that of a fish. The chiwei in the mid-Tang dynasty cliff relief carvings at Lingyun Monastery, Leshan, Sichuan, for instance, are shaped like the head of a fish with a wide mouth engulfing the ends of the roof ridge. Beginning in the Yuan Dynasty, the chiwei tail arched outwards instead of inwards. In the Ming and Qing dynasties, the beast's head opened its mouth around the ridge, the tail curved outward, and the end (duanbu 端部) changed from bifurcated (fencha 分叉) to curled (卷曲). Furthermore, dragons and swords were attached to the body of the beast and its shape was squared off. During the Ming and Qing dynasties, chiwei were commonly called chiwen, shouwen, or dawen. The term appears in the statutory documents of official histories like the Chenshu and the Songshi where the types and grades of buildings that can use chiwei are regulated, thus it would have been a marker of high status. Provisions for the size, manufacture, man hours, and other regulations for the use of chiwei on different types of buildings are outlined in the Yingzao fashi (1103 CE), 13.5a-b.

Any information without attribution has been created following the Syriaca.org editorial guidelines.

How to Cite This Entry

Copyright and License for Reuse